(It has been way too long since I launched a side project. Time to get back into the game. This blog post is adapted from a five-minute talk I gave today at Ignite Chicago.)

Everybody knows YouTube comments are atrocious. This is referenced all over the place, from a bunch of blogs to xkcd (twice!). One guy even took the time to make YouTube Comment Snob, a brilliant browser extension that hides poor quality comments.

If only we could extract some value from all that crap. 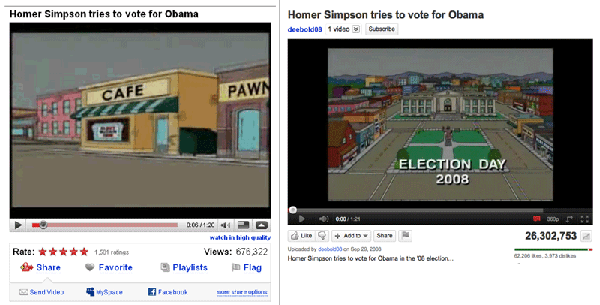 In this new rating system, each video displays how many people have liked -- and disliked -- it. In a classic example of interfaces influencing behavior, this has encouraged users to make insulting remarks about the dislikers. I'm sure you've seen the type: it's comments like "439 people own a zune" on the 2001 Steve Jobs iPod presentation. (439 people had disliked the video at the time the comment was posted.) 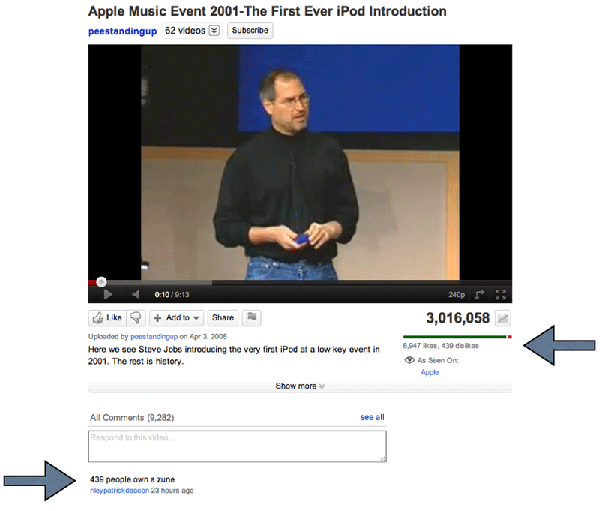 After groaning about these types of comments for a while, I realized they're a sort of semistructured information -- it's always a number, followed by some sort of insult. And, besides, some of them are actually kind of witty. Hence my new project: The YouTube Insult Generator.

This is a basically a "search engine for insults." Type in a search term, and it'll give you insults you can use against a person who doesn't like that term.

For example, enter "the godfather," and it'll give you "You sleep with the fishes," "You sleeps with horsehead in bed" and "You will get an offer you can't refuse." Enter "alfred hitchcock" and it'll say "You had your eyes plucked out by crows" and "You have Vertigo." Enter "mario brothers" and it'll say "You aren't Super enough for Mario," "You can't beat world 1-1" and "You are bowser." You get the idea.

It finds stuff only about 50% of the time, but it works surprisingly well when it does work. Try general terms ("car") and pop culture ("michael jordan", "i love lucy"). Each insult includes a link to its source YouTube video.

How does this work? It uses the YouTube API to search for the top 50 most relevant videos for your search term. For each of those videos, it grabs the latest 50 comments. Then it looks through all that for comments starting with a number followed by a word such as "people," "youtubers" or "nincompoops." (View source for the full list, a regular expression that would make Alex Gaynor proud.) Finally, it just replaces the number and the word "people" with "You."

It doesn't do anything fancy like caching or giving users a way to mark searches as particularly funny, but it's not bad for a quick hack. Enjoy, and please use the insults wisely.

UPDATE: Wired wrote about it. Also, a few people have been confused about what the point of this is. It's not intended to be literal -- I mean, I don't expect people to use this, at face value, to create insults. The larger point is that it's a demonstration of finding structured data in unexpected places. I think we should experiment more with this sort of "poor man's data mining" on things like YouTube comments. Thanks for checking it out!

20 people will be our Canadian Slaves

Could use some tweaking.

1. You got really offended. you ugly elephants ass face fuckers. yo face got more rinkles then my grandfathers nut sack. ^_^

You thinks jazz is dead

Clever... and funny in a different way than you intended:

http://www.holovaty.com/youtube-insult-generator/#fat cats in party hats
"You had hella andrew jacksons"

Here are some responses I received from the bot:

You dislikes because you work on an old oil tanker that's gonna wreck at first wave. -.- #

You don't know what is family love. #

You were forced to practice violin 5 hours a day since you were 3. #

You probably think this is real. #

You obviously DO NOT underand nor recognize TRUE LEADERSHIP when it is literally staring them in your faces :-) #

I saw some real funny stuff in there. Loved it.

At last someone has automated thoughts. Now he can focus on replacing the electoral college.

You are Cowboys from Brokeback mountain.

haha, that came up, when I put my own name in...hahaha

Not take it seriously? I think it's prophetic! I typed in my boyfriend's name & guess what popped up: "You wont ever be my corner stone."

I went to tons of links bfoere this, what was I thinking?

You house was destroyed by an enderdragons superflame #

You shit your brains out when you played penumbra #

You has shit your pants while wearing white pants on their first date. #